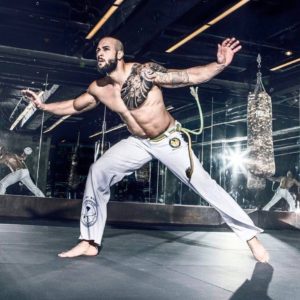 Rodolfo Calfa, known in Capoeira as Professor Titan is the one leading Axé Capoeira in Hong Kong, he was born in the city of São Paulo, Brazil, in 1982. His first contact with capoeira was in 1996 at the age of 14, where he met Master Andrezinho, one of the first students of Master Eddy Murphy, with whom he has trained for years and participate in countless Capoeira events throughout Brazil.

In 2005 Professor Titan had his first international experience, where he toured for 3 months in Latin America.

After his long journey abroad, Professor Titan returns to Brazil in 2011, becoming one of the leaders of the Axé Capoeira Group in São Paulo. In 2013, he held his first capoeira event, with renowned Masters of Capoeira such as Master Barrão, Master Eddy Murphy among other illustrious Masters and Teachers of Capoeira.

Still in 2013, Professor Titan moved to Macau, China to work with the renowned Master Eddy Murphy and continue his learning and development with capoeira.

In 2016, Professor Titan resides in Hong Kong where he dedicates his life to the art of capoeira, teaching and expanding the greatest Brazilian cultural expression leading the group Axé Capoeira in Hong Kong.

In 2021, Professor Titan was honoured to be recognised by the Consulate General of Brazil in Hong Kong as the ambassador and diffuser of Brazilian culture in Hong Kong.